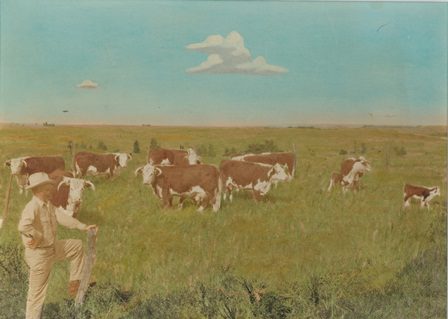 Moxley Ranch, currently owned by Tom and Virginia Moxley, occupies land originally purchased in the 1930’s by Tom’s parents , Jerry and Edna Moxley. The story of this ranching family and its connections to the Flint Hills, now extends to six generations.

Moxley Landing, Civil War, and a six-year-old Drover
As a result of the human and financial carnage of the Civil War, John and Sarah Moxley and their eleven children left the family tobacco plantation at Moxley Landing on the Cumberland River in Kentucky and moved west to the Flint Hills of Kansas. They were looking for open country where farming did not require constant tree cutting to clear the fields and an area that would support cattle.
With a train of 14 wagons, lots of children, and a herd of cattle, they forded the Mississippi River at St. Louis and the Missouri River at Westport (Kansas City) and followed the Santa Fe Trail southwest to Council Grove, Kansas. They arrived on December 7, 1871. The older boys rode horses, leading the oxen which pulled the wagons. The younger children pushed the cattle behind the train. Jeptha Forest Moxley, (father of Jerry Moxley) was 6 when he made this memorable trip as a young cowboy. This was the beginning of a long bond and respect for the Flint Hills grasslands by the Moxley family. 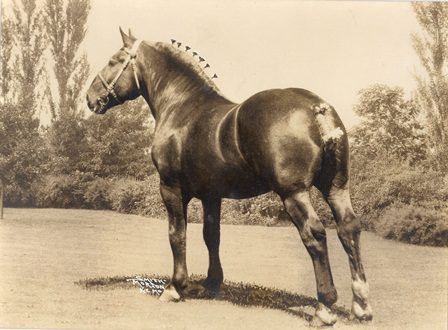 When the Moxleys first reached Council Grove, settlement was not possible as the area was still part of the Kansa (Kaw) Indian Reservation. While it was to be opened later for new immigrants, after the Kaws were moved to the Oklahoma Territories in 1873, no land was available for settlement near Council Grove when the Moxley homesteaders arrived. So, the wayfarers backtracked 30 miles east and purchased a homestead 2 miles west of Osage City. From there the bread winners could have a side job of quarrying flag stone for the rapidly growing Topeka and mining coal for the Atchison, Topeka and Santa Fe Railroad.

As a youth Jeptha herded cattle in the largely unfenced tall grass range in a radius of 25 miles from the homestead. It was unfenced because the area had few trees for posts or money for barbed wire. Jeptha’s formal education consisted of attending school in someone’s home for a couple months in the dead of winter. As an adult, Jeptha made two runs in the Cherokee Strip land rushes. In the first run he traded his tract of land for a deer rifle. Of his successful second run, he later said, “I learned enough in the first run to keep the land that I staked in the second run.“

Jerry’s Teenage Summers, Kansan, Moxley Hall
That Medford, Oklahoma tract was wheat farmed with a team during numerous summers (believed to be 1911 to 1920) by Jeptha’s adventurous teenage sons, Jerry and Harry Moxley who spent their Oklahoma summers living in a dugout and hunting wild game for their supper. Their annual trips from Osage City to Medford took them through much of the Flint Hills and as a result they each developed an abiding appreciation for the grasses that grow in the region. 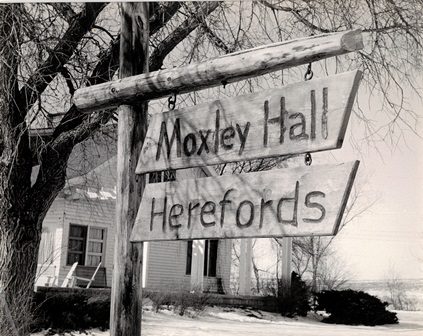 Both brothers loved horses and gained plenty of experience studying the “South end of a North bound” horse as they drove teams to and from Oklahoma and in crop and hay fields. Harry, the oldest, went on to graduate from Kansas State Ag College (KSAC) in 1920 and later specialized in equine science as a professor at Michigan State University. Jerry also graduated from KSAC in 1921. He showed cattle for prominent Hereford breeders before beginning work as the first extension agent in Brown County. That is where he met and married his lifelong partner, Edna Brown Moxley.
His career in extension broadened when he became Beef Cattle Extension Specialist for K-State. This led to a 20 year stint of traveling the state of Kansas explaining new research findings to eager-for-knowledge producers. During the dust bowl era, Jerry helped many cattlemen save their cow herds by helping them relocate their herds to the Flint Hills, where grass and water could be found even in the driest years.

Jerry’s first love was not cattle, it was horses, especially Percheron Draft Horses. He bred and raised “Kansan”, a Champion of many national shows and rated as the top American-bred Percheron in the 1930’s. Of this achievement, Jerry is quoted as saying, “I got to the top of the Percheron business just when the draft horse business got to the bottom.” 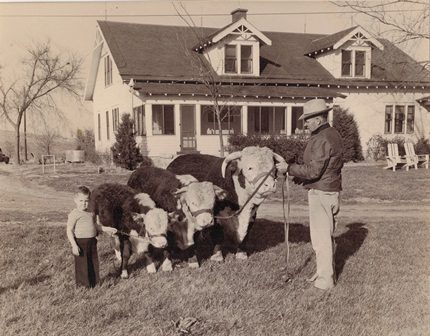 Buying Moxley Ranch
In the 1930’s, Jerry and Edna looked extensively for a permanent home for their Hereford cows and Percheron horses. Finding many farms and ranches for sale, they bought what is now known as Moxley Ranch near Council Grove at the bottom of the depression in 1935 from D.A. Lee, an elderly cattle feeder.

Mr. Lee had built many of the ranch headquarter buildings that are still used today. He built a double crib and grinding system in 1906, the main part of the horse barn in 1916 and rebuilt the main house in 1918 after a fire destroyed the original home. All of the timber for these buildings is walnut and oak grown on the ranch. Al Lee was a very successful cattle feeder, but tough times in the 20’s and the collapse in the price of fat cattle from $12.80 per hundred weight in January of 1930 to $4.75 per cwt in 1933 led to the forced sale of the ranch. An agreement to purchase was made on February 28, 1935 the day before it was to be foreclosed upon by the bank.

For ten years after buying the ranch, Jerry continued to work for K-State and commuted to the ranch on weekends. In 1945, he sold one Hereford bull calf for more than his annual salary and realized he could afford his dream of full time ranching. Registered Hereford seedstock was the economic driver of what was known for decades as Moxley Hall Hereford Ranch. The ranch was named “Moxley Hall” by family friend and cattle breeder Dan Casement who knew of a Moxley Hall estate in England. Herefords were the leading breed in the U.S. in this era and Jerry Moxley was one of the nation’s outstanding Hereford breeders. His experience led him to judge every prominent Hereford cattle show in America.

Moxley Ranch Today
Each of Jerry and Edna’s four children, Lynn, Hall, Tom and George were given starts in the Hereford business through 4H projects. Lynn’s life work was at the Veteran’s Administration in Washington, D.C. and George is a rheumatologist at the Medical College of Virginia at Richmond. Hall bought and developed a neighboring property that he operated until his untimely death in 1984. Tom and his wife, Virginia (Munson) returned to the main ranch in 1971, purchasing it in 1979. They both followed Jerry’s advice to “pick a life’s work that you would rather do than play.” In addition to maintaining the registered Hereford herd, Tom began to run stockers in the 1970’s. By 1981, the purebred herd had been sold, a decision that proved to be pivotal to surviving the “farm crisis”, as it was known in the 1980’s. Grazing and Cowboys
Moxley Ranch has evolved to nearly all calves and yearlings that are run on Flint Hills tall grass pastures and in the ranch’s small backgrounding yard. As is customary in the area, some of the pasture land cared for by the Moxley crew is owned by outside investors and the cattle by yet other owners. Most of feeders raised on the ranch are aimed at two markets. The grass calves are bought from December through Marchand mostly sold as feeders at about 800 lbs for a July or August delivery to a feed yard. And from September to November, calves are bought for feeding on corn silage and are sold as feeders in December through February. The year-around approach of buying and selling helps even out the market gyrations for both buying and selling. 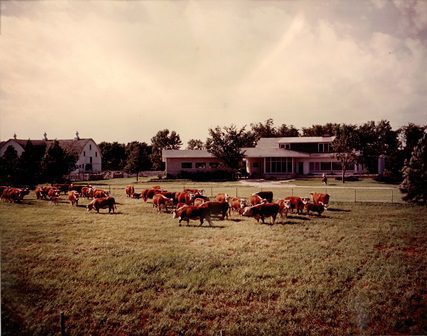 Sixth Generation of Flint Hills Ranching
In addition to operating the ranch, Tom represents the people of Morris and much of Dickinson Counties in the Kansas House of Representatives. Virginia is Professor and Dean of the College of Human Ecology at Kansas State University.

Tom and Virginia’s children are Amy Westfahl (Jerrod) and Angela Weltz (Andy). Amy and Jerrod have three children, Eden, Cade and Isaac who, when horseback, became the sixth generation of the Moxley family connected to Flint Hills ranching